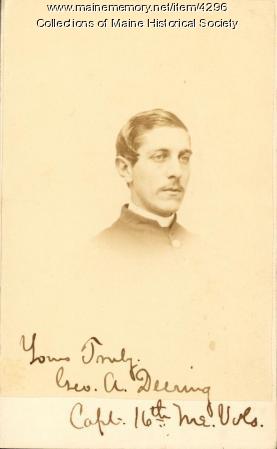 George A. Deering (ca. 1844-1890) of Saco began his Civil War service in June 1862 when he recruited men for new regiments Maine was forming.

In August 1862, Deering was mustered in as 2nd lieutenant in the 16th Maine, later promoted to captain.

At Gettysburg, he commanded companies F, D, and A. He and his whole corps were captured on July 1. Deering spent 10 months at Libby Prison, then sent to various prison camps along with other officers. He escaped by assuming the name of a dead or missing soldier.

He returned to Saco after the war, but later worked in Washington, D.C., as paymaster for the U.S. Navy.