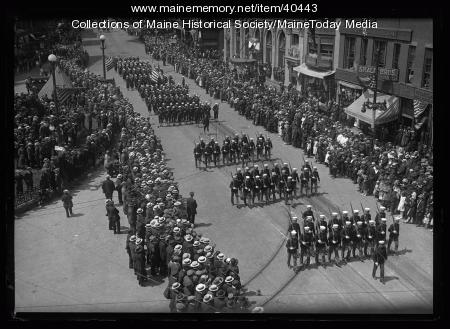 Sailors and marines from the ship USS Utah march along Congress Street near Monument Square during the Maine Centennial Celebration that was held June 26 to July 15, 1920. Published in the July 6th ed. of the Portland Evening Express.

The celebration marked the 100th anniversary of Maine statehood.

This photograph, along with others featuring military and naval processions, was on page twenty-two of the Tuesday, July 6, 1920 issue of the Portland Evening Express with the title, "Photographs of Parts of Monday's Big Military and Naval Parade."