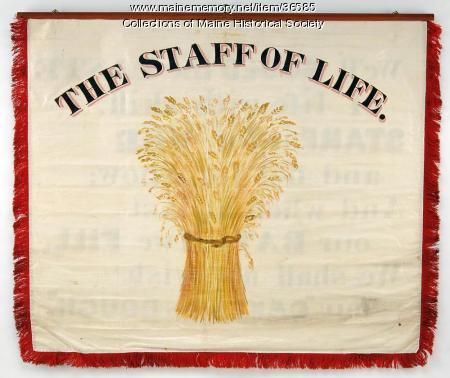 A sheaf of wheat accompanied by the words "The Staff of Life" represented the Bakers and Confectioners trade group of the Charitable Mechanic Association in Portland on this banner painted in 1841.

The reverse of the linen banner reads, "We'll Mould the Paste of life with skill, Stamp it for Use and not for show; And when at lest our Batch we Fill, We shall not wish our "Cake was Dough."

Members of the trade group carried the banner in a parade on Oct. 8, 1841 in Portland, along with 16 other trade groups that belonged to the association. The parade was part of a Triennial Festival that promoted civic pride as well as the skilled artisans.