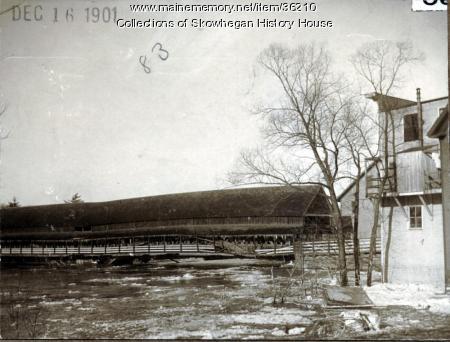 The historic South Channel Bridge was one of two original covered bridges built across the Kennebec River at Skowhegan Island in 1808. Having survived generations of floods and freshets over a 90-year span, the bridge was nearly destroyed by the December freshet of 1901.

The autum of that year was extrodinarily cold and the river surface had frozen into ice more than a foot thick. Complicating the ice situation, the annual log drive had been stalled by the cold and tree length logs were frozen into the ice.

On December 14, the weather abruptly changed and a heavy warm rain fell for several days. The frozen river broke up into huge ice cakes mixed with the logs acting like battering rams against the bridges and dams up and down the Kennebec valley.

In Madison, about 10 miles north of Skowhegan, a heavy wooden footbridge washed out and the debris came downriver and plowed into the South Channel Bridge, severly damaging it. When the river receded, the bridge was still standing but was in need of extensive repair. This was done but the bridge had to be replaced with a new steel span in 1904.