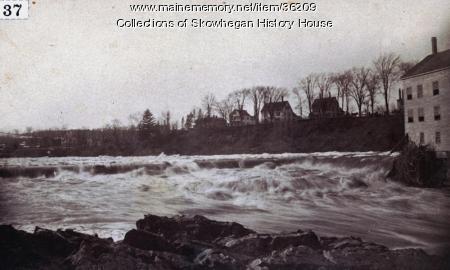 "(Shown through the courtesy of F. R. Philbrick)

Time of year is not given, but conditions of the trees and the feet of the ice going out would indicate that it must have been the late fall or early spring. This is high water, but by no means a flood condition. In the freshet of 1901 this same view would have shown a perfectly level river, where now appear quite distinct signs of the dam.

The Robinson Mill, a wooden building, show plainly at the right.

On Elm Street, in the distance, at the left, may be seen the Major J. W. Fogler residence. The Harrison Baker home shows through the edge of the pine tree in the center. The old Fletcher residence, occupied in this picture by the S. W. Gould home, was in the exact center. To the right of these premises is the Benjamin Dodge house, now occupied by Mrs. Annie P. Hackett. The William Philbrick homestead is still farther to the right. Mr. Philbrick was a bank cashier and later for many years treasurer of the Kennebec Log Driving Company. In this he was succeeded by his son, S. W. Philbrick, and he in turn by his son, William, thus creating a succession of three generations in this office. The Bradford House, at present owned and occupied by John R. McClellan, is still farther to the right. The Parlin homestead, now owned by the American Woolen Company and occupied by its agent, Thomas E. Greenway, shows by the Robinson Mill.