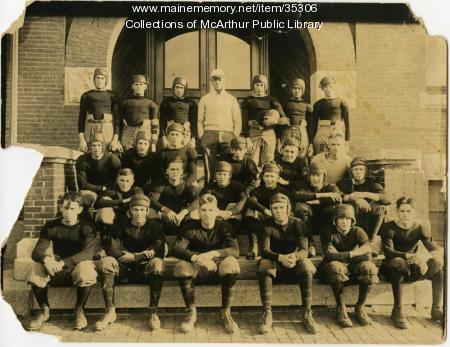 The Biddeford High School football team and Coach Elton O. Feeney, 1921, on the front steps of the old high school located on Alfred Street. An article in the local newspaper from September 17, 1921 describes the team as "a number of husky lads at the school and while not many of them have much practical experience, there are a number who played with last year's freshman team and others who have played the game with local teams, who are coming out with the squad and promise sufficient material for the building of an excellent team." The article goes on to state that "the only difficulties which may interfere with football at the school are the finances which will be requried to suitably equip the team, there being absolutely no football equipment at present." It was suggested that alumni could throw a ball or other fundraiser to equip the team. Since the team portrait shows them in their finery, it can be assumed that the fundraising was successful.