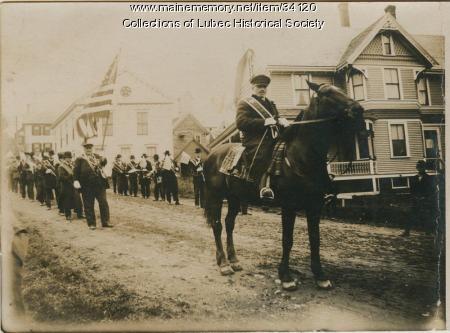 Unsurfaced Main Street appears quite rough as this parade heads down toward the business-oriented Water Street, a block away. To the left the Masonic Lodge and the house behind it remain as of 2010; the Mowry house on the right was moved after mid-20th Century. Some men are wearing topcoats. Independance Day, the most likely date for such a parade, can be foggy and chilly in Lubec. The large flag carried by the stout gentleman appears to display 46 stars. The 46 star flag was authorized on July 4, 1908. The 48-star flag came into use on July 4, 1912, and the parade clearly is not 1911, when Lubec celebrated its Centennial.