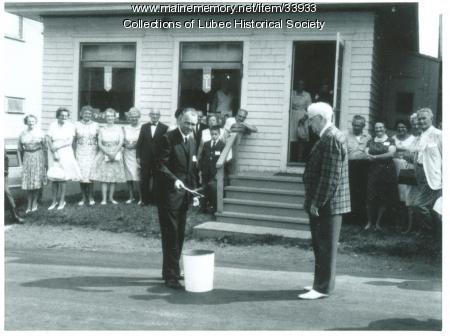 During the latter half of the 20th century this building on School Street, once Grace Morgan's Dew Drop Inn tea room, housed the public library in Lubec. The mortgage paid off, the ceremony pictured here took place. The building visible to the extreme left was the old Lubec post office. It burned in December, 1965, and its location became the site of Lubec Memorial Library in 2000. The building in this photograph was moved to North Lubec Road adjacent to the Grange building, where it still stands as of 2010.