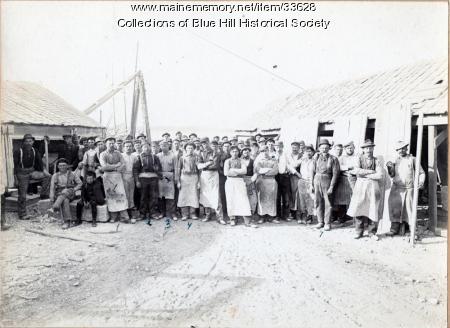 Running east along Blue Hill Harbor, glaciers left exposed a rich vein of blue-gray granite. In the early part of the nineteenth century, the stone was prized for the construction of bridges and large buildings in fast-growing American cities.

By the mid-point of the nineteenth century, several quarries were active along East Blue Hill Road. This image shows approximately 50 men and one boy posed in a group shot, some of them with aprons. Handwritten notes on the margin name seven of the men without specifying their location in the photograph: Elmer Coomer, Emory Howard, Walter Stover, Nelson Candage, Fred Johnson, Henry Clay, and Purl Cooper.