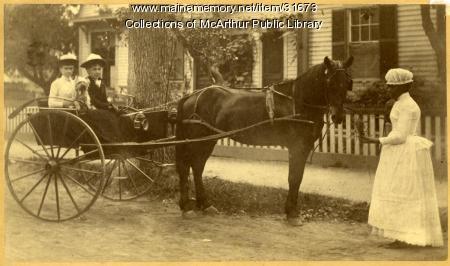 Seated in a two passenger Stanhope Gig, built approximately in 1880, are Laura Allen, a companion and a small family terrier pet. Holding the horse and offering some grasses is the Allen family's maid, Minnie J. Taylor.

The Allens had many friends in Biddeford and Saco whom they visited frequently, such as the Dearborn family. This image was originally in the possession of a Dearborn of Biddeford.