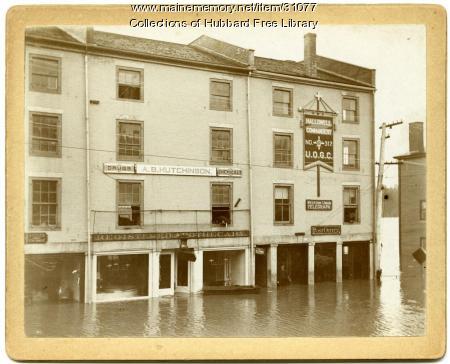 When the Kennebec River, which can be seen at the right of the image, flooded on March 2, 1896, the water rose 2 feet higher than during the 1870 flood, as recorded on the granite corner of the Post Office building. Note the "trapped" person peering out the second story corner window.

The banner of the United Order of the Golden Cross, Hallowell Commandery No. 317 hangs on the corner of Merchants Row on Water Street. The UOGC was the first fraternal benefit society to admit men and women on an equal basis. The order consisted of local lodges called "Commanderies" and was found in the states of Alabama, Connecticut, the District of Columbia, Maine, Massachusetts, New Hampshire, New York, Rhode Island, and Tennessee. Its governing body was called the "Grand Commandery."

In 1896, Merchants Row also housed the Hallowell Post Office, Western Union Telegraph and the A. B. Hutchinson Registered Apothecary.