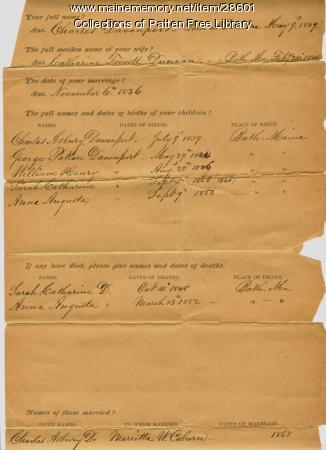 This worksheet about the Charles Davenport family was part of a concerted effort to document genealogy by the Sagadahoc Historical Society, organized in 1877, a time of the nation's centennial celebration that sparked many localities to create historical societies.

An 1891 article in the "American Sentinel" noted that the Society had added to its by-laws an 1888 provision that provided for the equal admission of women to the group. As noted in an essay by Denise Larson, when the Patten Free Library was planned, the library trustees offered a room in the new building to the Sagadahoc Historical Society, which accepted the offer and voted to donate $100 toward the costs of construction. The Society occupied the second-floor tower room until 1911, when the library requested that space as a dedicated children's room. The final meetings of the dwindling society were held in the Cosmopolitan Club, a women's social organization, housed in a former residence on Washington Street across from Patten Free Library. The Sagadahoc Historical Society formally disbanded in 1913. The History Room was resurrected about the time of the nation's bicentennial and became the home of the newly incorporated Bath Historical Society in 1989.