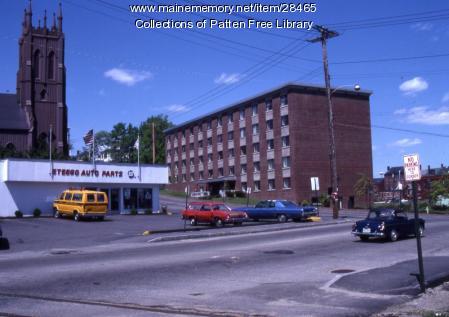 In the foreground of this 1980 photograph of the important intersection of Centre and Washington Streets, Steego Auto Parts occupies the northwest corner of that intersection, as it did until approximately 1995. In the background, Washington House, an apartment complex built in 1974, sits on the east side of Washington St. To the north, on the west side of Washington Street, the Chocolate Church can be seen behind Steego Auto Parts. The history of this intersection shows the changes in Bath's urban environment brought about as transportation evolved from horse and wagon to rail and ultimately to the automobile.