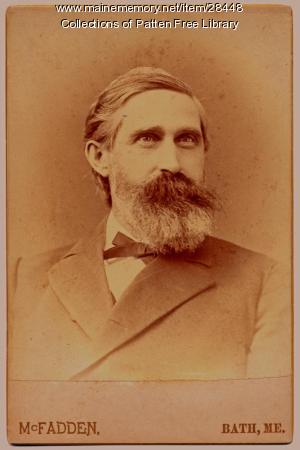 This sepia-toned portrait of James Crommett Ledyard with its gilt edging was taken by James A. McFadden of Bath. J.C. Ledyard (1833-1907) was born in Waterville as James Crommett, the son of Harriet Ledyard and her husband Orrin D. Crommett. J.C. Ledyard reportedly had his name changed by special act of the Legislature, perhaps shortly after he came to Bath and began work in the family dry goods store. Ledyard was the grandson of William Pitt Ledyard (1774-1812), who married Mercy Palmer, the daughter of his business partner, Asa Palmer. Asa then served his grandchildren, including William (1797-1863) and his sister Harriet, as guardian when William died in 1812. The initial partnership started a business at the corner of Water and Centre Streets. The 1850s Ledyard Block was constructed by this second William and Asa Palmer; their business interests were continued and expanded by James C. Ledyard. J.C. Ledyard also served Bath in a number of capacities, such as the first president of the Bath Y.M.C.A. when it was formed in 1856 and as mayor from 1882 to 1884 when he was elected unanimously. An 1899 publication noted that he was the largest individual real estate owner in the city.