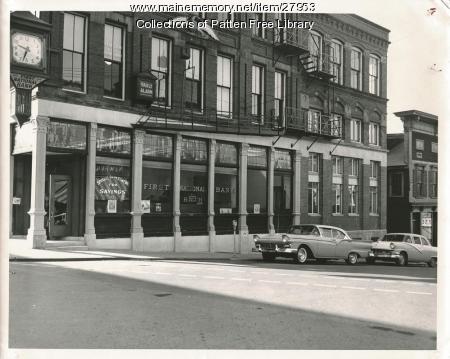 This black-and-white photograph pictures the Centre Street facade of First National Bank at 54 Front Street in the Lincoln Block, and its western neighbor the Adams Block in the mid 1950s. Both buildings, designed by Francis H. Fassett and completed in 1878, are about 80 years old in the photograph.

The eagle, depicted in the stereotypical "national symbol" form, is an artifact retained from the previous structure on this site, the Bath Bank building, constructed by William King in 1810. That early building, the first brick building in Bath, housed both King's Bath Bank and the customs house.

Above the entrance to that important building, the eagle was hung in the pediment of the portico. That eagle is in the collection of the Maine Maritime Museum now. Considering the history of both structures on this site, a bank was at this corner for 150 years, ending when the First National Bank moved to a new building across Front Street in 1962.