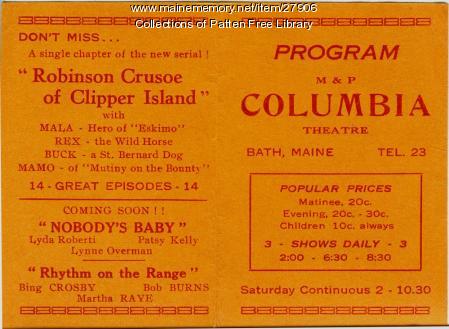 A program from the Columbia Theatre in Bath advertising the film offerings for April 19-24, 1937. After closing for several years, the Columbia Theatre had reopened in July of 1936 with a new screen, projection booth and modern sound system, and was now owned by M & P Theatres, which owned more than 90 theaters in New England.

The Columbia Theatre had been open for only 15 months when it was destroyed by fire, and only the four brick walls remained. In addition, there was significant damage to eight other businesses and several social organizations also housed in the Columbian Block. M & P Theatres and the Sagadahock Real Estate Association rebuilt the theater as the Uptown, which opened in August of 1938.