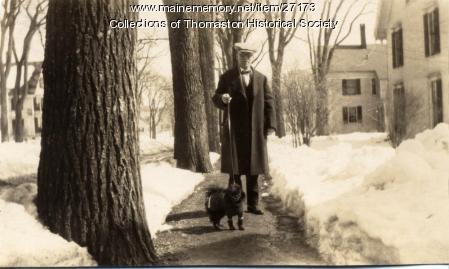 John Hewett, b. Thomaston, May 27, 1871, the son of Lt. James H. H. Hewett and Susan Ludwig Hawk Hewett, walks his dog, Judge. The photo is taken on the south side of West Main Street in front of Edward O'Brien's house (326 Main) in Thomaston.

The large elms that were planted in the 1820s by William Keith and other citizens may be seen, lining both sides of the street. They were all destroyed by Dutch Elm disease in the 1970s. In 1963, the first diseased elm was found and promptly removed. An ambitious regimen of spraying and pruning limbs took place over the next few years to retard the destruction of the elms, but it was to fight a losing battle. Each year the numbers of elms removed were listed in the town annual reports: 1969 (2); 1970 (3); 1971 (11); 1972 (14); 1974 (45) with 542 elms remaining in town; and in 1975 (48) elms were removed. Concerned committees joined together to raise funds for new tree plantings. The town appropriated $3,000 for tree plantings in 1978, and a newly organized program was formed resulting in the planting of approximately 200 trees.