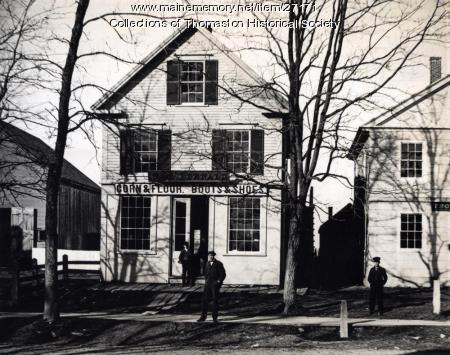 This building was built on Main Street, opposite the Episcopal Church and next to the granite Thomaston Bank, (just visible on the left side of the photo) and used as a dry goods store, operated by W. L. Fernald.

An article in the Courier Gazette entitled "A Walk in Retrospect” appearing in 1881 made the following statement: "David Lermond is remodeling a house moved from the 'Corner,' in the vicinity of the Stimpson block. He is adding an ell and building a barn. Ludwig Street was named in honor of one of Thomaston’s noted physicians, Dr. Moses Ludwig."

The store was moved to the end of Ludwig Street, where it still stands as a private home.

The Stimpson Block was built on the north side of Main Street in 1874. At this time the old granite Thomaston Bank building, built in 1825, was removed and the bank was re-established in the eastern part of the Stimpson Block.