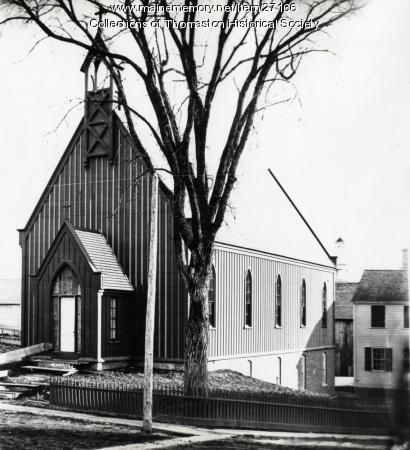 According to an early yearbook, the work of the Episcopal church started in Thomaston in 1867. Services were held at first in the Unitarian Church on Congo Street, and then for six months in Union Hall in the Union Block on Main Street.

Bishop Neely of the Episcopal Diocese of Maine bought three lots at the corner of Green and Main Streets in 1868. A house on the property, known as the Baker House, was moved to a location behind the new church, just visible on the right side of the photo. The cornerstone for the church was laid September 3, 1868.

The congregation started using the church before its completion. On Easter evening 1869, the incompleted improperly supported floor gave way, dropping its parishioners to the floor below.

The original bell belonged to the Unitarian Church and was presented to the new church by Edward O'Brien and Bishop Phillips Brooks. The small center bell tower on the gable was later removed, and a more elaborate stick-style tower was built on the west side of the front entrance by Francis H. Fossett in 1872.