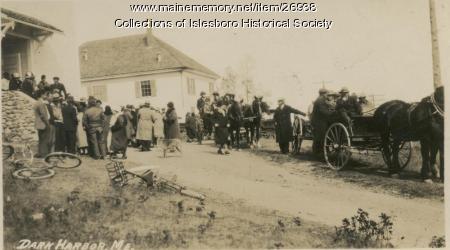 This photo, taken in 1933, is of a town meeting held at Islesboro's Town Hall. At the meeting, the islanders were debating the current ban of automobiles on the island. Islesboro was one of the last places in the country that actively prohibited automobiles. Summer residents believed that the horse and buggy was a much more rustic and traditional form of transportation. However, the islanders believed that it was an inadequate and out-dated form of transportation. After twenty years of debate, Islesboro residents voted March 17, 1933 to repeal the ban on automobiles.