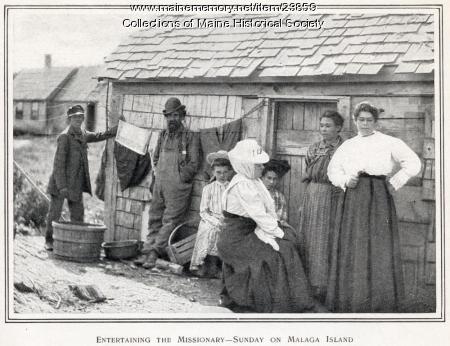 In 1860, a community of Black, mixed race, and White people started living on Malaga Island, off the coast of Phippsburg. They created a closed community where they could live outside of the racism present in many majority White towns.

At the turn of the 20th century, Maine was being marketed as a "vacationland," and the poverty of Malaga was viewed as unsavory to tourists. Paired with anxiety about monetary social services to Malaga residents, a weak economy, and the rise of eugenics—the discredited theory that people, usually those of color, were degenerate or immoral and should be removed from society—residents of Malaga were caught in the crosshairs of the state.

Malaga's residents were formally evicted in 1912. Several were institutionalized, some were sterilized, and all were displaced. State employees even exhumed the cemetery remains on Malaga Island, and moved them, along with the institutionalized residents, to the "Maine School for the Feeble Minded," once located at Pineland Farms in New Gloucester.

This image was part of a story in Harper's Monthly Magazine. written by Holman Day, titled, “The Queer Folk of the Maine Coast,” in the September 1909 publication, pages 521 to 530.