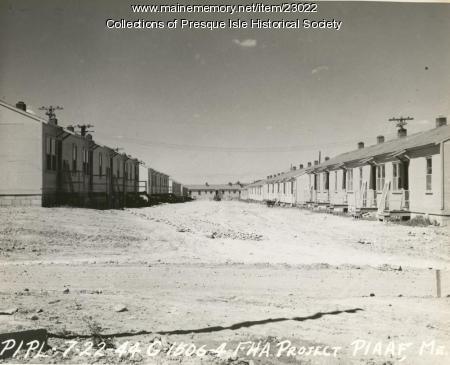 Fairview Acres was built as a temporary housing project in 1944 for Presque Isle Army Air Force families. The photograph shows the back doorways of each of the apartments in the row.

It looks like the screen doors are being installed onto the apartments at right. There are a couple automobiles at the end of the row of apartments, indicating that perhaps some of the apartments are occupied.

Fairview acres had 24 buildings with a total of 125 apartments. The streets had potato variety names, such as Sebago Court, Green Mountain Drive, Katahdin Court. All buildings were wooden frame except for the administration building which was made of cement block.

After the war, civilians moved into the units. The Presque Isle Housing Authority began operating Fairview Acres in 1953. In 1983 the apartments were abandoned. They were burned by the Presque Isle Fire Department in 1984.