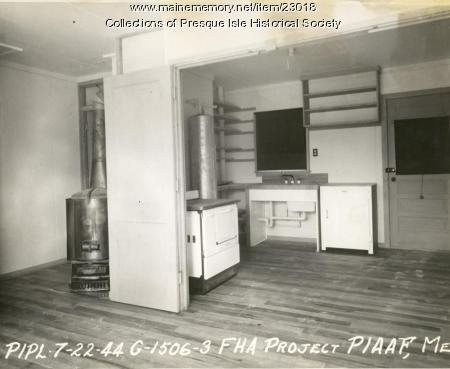 This view is from the living room into the kitchen. The black heating stove burns coal. In the kitchen you will see a hot water tank behind the kerosene burning cook stove. There is a kitchen sink, of course and an icebox. At the time, an ice truck would deliver ice to the apartments. Children would follow the ice truck, hoping to catch a nice cool piece of ice. The doorway exits to the street side of the apartment.

This apartment appears to be unoccupied.

Fairview acres had 24 buildings with a total of 125 apartments. The streets had potato variety names, such as Sebago Court, Green Mountain Drive, Katahdin Court. All buildings were wooden frame except for the administration building which was made of cement block.

After the war, civilians moved into the units. The Presque Isle Housing Authority began operating Fairview Acres in 1953. In 1983 the apartments were abandoned. They were burned by the Presque Isle Fire Department in 1984.