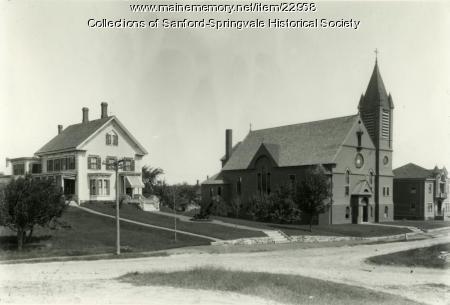 Services were held in the basement of the church until the upper part of the structure could be finished. For several years thereafter the basement was used for the parochial school. The convent, to the far right of the photograph, was completed in time for the arrival, on September 6, 1903, of the Sisters of Mercy. The Sisters of Mercy had been invited to Sanford by Father McGinnis to take charge of the school. The parish celebrated its centennial in 1992.

Sumner Increase Kimball, who grew up in the Kimball house, later became the only Superintended of the U.S. Lifesaving Service and the organizer of today's Coast Guard.