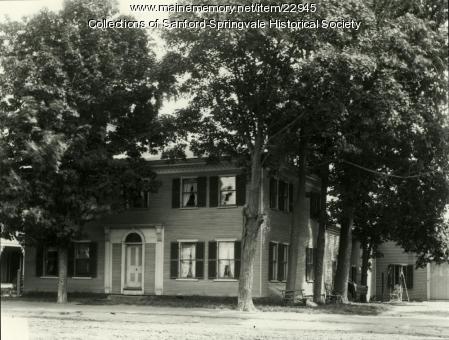 This handsome house, which stood on Main Street opposite the Baptist Church near Sanford Square, was built around 1803 by Thomas Keeler, a successful early businessman and political figure of Sanford.

Keeler served Sanford as town clerk and selectman, was postmaster for two years, and served two terms as representative to the General court of Massachusetts, before Maine became a separate state. Despite his many appointments, Keeler was not always successful at the polls. It is said that for one election Keeler carried a barrel of rum to a town meeting and offered to serve without pay if elected, but he was rejected by the voters.

General Timothy Shaw kept a tavern in this house from 1835 until his death in 1870. Thereafter it was the home of the Gowen family. The house was moved in 1925 to Oxford Street where it still stands.