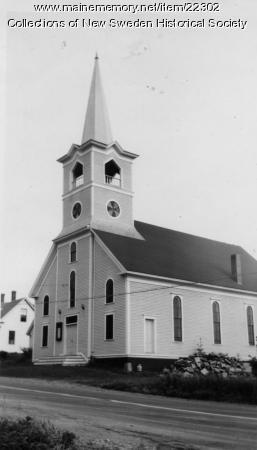 The History of the Evangelical Covenant Church, New Sweden, is taken from the pamphlet titled "One Hundred Years In New Sweden" published in 1970.

The Free Mission Church has undergone a number of changes since its inception under the leadership of the Rev. C. W. Holm. On November 27, 1886 a new church with 17 charter members was organized. They selected as their first pastor, O.P. Fogelin, one from their own group who had been deeply infuenced by the visiting preachers and who displayed outstanding qualities of leadership. He was to give the church guidance for twenty-six years. During his ministry, the church building was constructed. The dedication service was held on December 6, 1891. The church steeple was built upon the receipt of a gift from W. W. Thomas in 1901 and completed the following year.
The ministry of the church included Sunday School work in a school house on the West Road/ This work was later moved to Westmanland. During this time the church had been incorporated as "The Free Christians Gospel Mission Church of New Sweden." In 1897 the church joined the Aroostook Conference of Congregational Churches. Paster Fogelin resigned in 1912.
Pastor Philip Frykholm served the church in the summers of 1940 and 1941 and then as permanent pastor until 1944. Under his leadership the congregation became affiliated with the Eastern Missionary Association. Rev. Wallace Cedarleaf was his successor for the next three years, during which time the church joined the Evangelical Covenant Church.