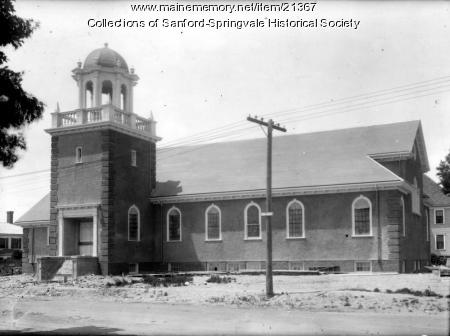 Sanford Unitarian Church, just prior to its completion, ca. 1918.

This denomination was organized in 1909 under the leadership of George and Louis Goodall, Edward E. Hussey, Samuel Nicholl, Fred J. Allen and other prominent persons. Services were held at the Sanford Town Hall until this building was completed. The Goodall recreation building, the gift of Thomas M. Goodall, was added in 1928. The site was formerly occupied by a store built by A. Porrell about 1889. Later operated by Albert Bachand, the store eventually became the "Moulton House", operated by Frank Moulton. The property was sold to the Unitarian Church in 1915 and the building moved across to the corner of Main and Winter Streets where Mr. Moulton continued to carry on his business.