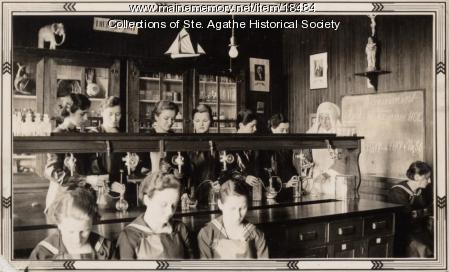 Sr. Marie was born on November 9, 1882 in Athies, Somme, France, the daughter of Jules Edouard Adriaensen and Octavie Focqueur. Sr. Marie du St-Cordon made her Profession of Vows on August 2, 1909 and arrived in St. Agatha, Maine on March 27, 1915 as a teacher of math and sciences. In 1944, Sr. Marie left for Madawaska, where she was named the superior of the religious community of Daughters of Wisdom at the Mary Mediatrix Convent for 2 years. She then returned to St. Agatha and served as the superior for the religious community of the Daughters of Wisdom from October 13, 1946 until June 22, 1952. Sister Marie was a great storyteller and had talent for writing plays. She died on May 21, 1970 in St-Laurent-sur-Sèvre, France.