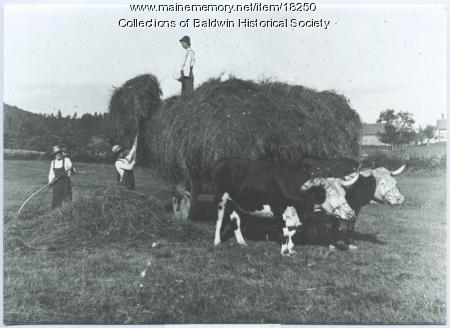 Haying was hot work in the early 1900s. Here a loafer rake is being used to rake up the scatterings while the final few pitchforks of hay are tossed up to the man waiting with his fork to pack it down. The hay is being pulled by two horned Herefords.

Abe Parker, probably of Baldwin or Sebago, found a remedy that his descendants related: he was bald, so he'd take a garter snake, coil him, and place him on his head under his hat. "Keeps you cool all day," he reportedly said.