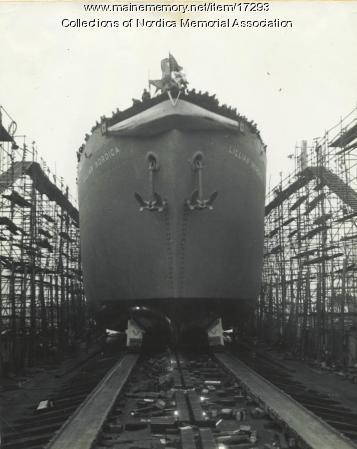 The S.S. Lillian Nordica was named after opera singer Lillian Nordica, born in Farmington as Lillian Norton, who became one of the first native-born Americans to achieve worldwide operatic renown.

It was launched on March 17, 1944 from the ways of the New England Shipbuilding Corporation at South Portland. Mrs. Guy P. Gannett of Portland, president of the National Federation of Music Clubs, was the ship's sponsor, and Representative Margaret Chase Smith was matron of honor.

The nameplate was removed by the Maritime Administration for distribution throught the Liberty Ship Memorial Program and was given to the Nordica Museum in Farmington.