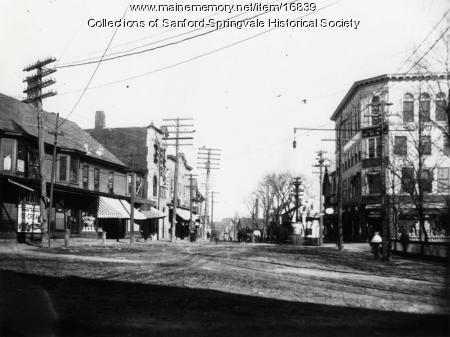 The Leavitt Block on the right is the only building still standing. It was built around 1900 after the old Post Office block, which stood on the same site, burned to the ground in 1899. This building was built by Frank C. Leavitt, a coal and wood merchant, whose more interesting sideline was promoting entertainment. The top floor of the building, removed a number of years ago, was a pool and billiard parlor. In 1908 he opened Sanford's first movie house in this building. Movies became so popular that he built he built Leavitt Theater on Main Street a few years later. Well known to the older generation, the old Leavitt Theater became the Capitol Theater in 1930 and continued in operation until 1968 when the building was demolished.