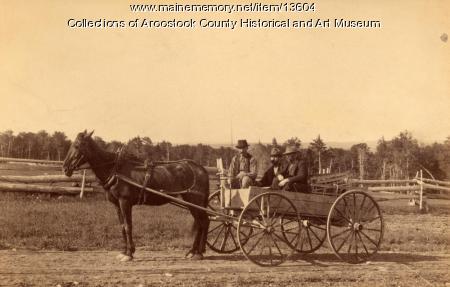 From left to Right; driver, Walter Mansur and E. B. White.

This photograph was taken by (Edward) E. B. White, a merchant with a jewelry shop diagonally to the south-west across Market Square from the Snell House, a fashionable hotel in late nineteenth and early twentieth century Houlton. (see MMN # 13674) White, a skilled amateur photographer and founding member of the Houlton Fish and Game Association, traveled throughout southern and central Aroostook County hunting, fishing, camping, and photographing the Northern Maine Woods.