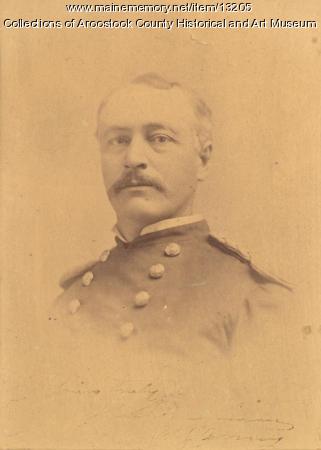 Henry Clay Merriam, a native of Houlton, during his second year at Colby College in 1862, raised a company of volunteers from Houlton and was commissioned Captain of company H, 20th Maine.

In 1863 he was given command of the 1st Louisiana Native Guard, the oldest black regiment in the Federal Army. In 1865, Merriam led this regiment on the final assault on Fort Blakeley, capturing the fort and taking 600 prisoners.

He was awarded the Congressional Medal of Honor for "conspicuous gallantry at Fort Blakeley, April 9, 1865."

Despite not having attended Colby College for two years, Merriam was graduated with his class in 1864.

He studied law, but reamained in the army, serving in the west.

Promoted to Colonel, he was involved in efforts related to the pacification of various Indian tribes through 1891.

In 1897 he organized a relief effort to rescue gold miners in Alaska.

During the Spanish American War he was promoted to Major-General of United States Volunteers and trained troops for actions across the Pacific. He retired in 1903 and kept a summer home in Portland. He died in 1912.