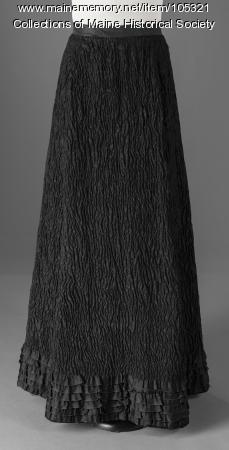 The person who wore this skirt is unknown, but the reason is somewhat more clear. A good example of mourning clothing, the skirt is made from silk crepe, a popular fabric for mourning clothing during the late Victorian period.

Mourning codes of conduct and related fashion became widespread in American society in the 19th century and early 20th century. Correct behavior and clothing was necessary to show respect for a loss, but also to display respectability. By the time of this skirt, and prior to World War I, the upper class and those climbing the middle-class social echelons felt pressure to participate in excessive mourning attire. This skirt may have been part of a black mourning wardrobe, worn over the course of a year or more.

Mourning clothes, while somber, were not entirely devoid of embellishment. The presence of embellishments often dictated the stage of mourning, increasingly ornate as time passed. The bottom of this skirt is trimmed with six silk satin ruffles, the last two of which are reinforced with pieces of black horsehair.