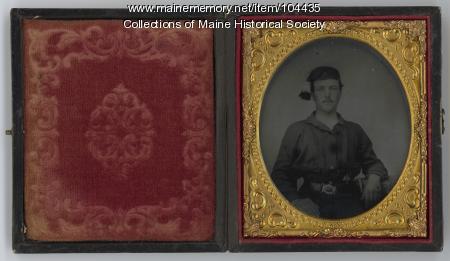 Portrait of James Davis of Plymouth, who served in the 9th Maine Regiment, Company I during the Civil War. A note attached to the image states "James Davis - 18y Plymouth, Co. I, 9th Maine, stationed Black Isl., S.C."

For the photograph, Davis wore a Zouave-style shirt and cap with a tassel. While American admiration for North African/ French colonial Zouave troops lent to several Zouave regiments in both the Union and Confederate Armies, the 9th Maine was not a Zouave regiment.