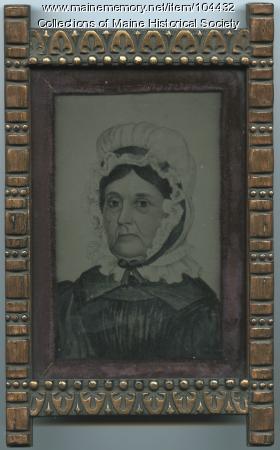 A folk art painting of a woman, likely painted sometime between 1830 and 1850, was photographed as a tintype. The practice of photographing previously made portraits (paintings, drawings, etc) began as early as photography. Portraits reproduced as daguerreotypes, ambrotypes and tintypes represent some of the earliest examples of reproducing art work for wider distribution or posterity.

Wildly popular in the 1860s and 1870s, the tintype's success decreased as the new century approached (1900s). While undated, this tintype was likely made during the era of the medium's greatest popularity, about 1870.