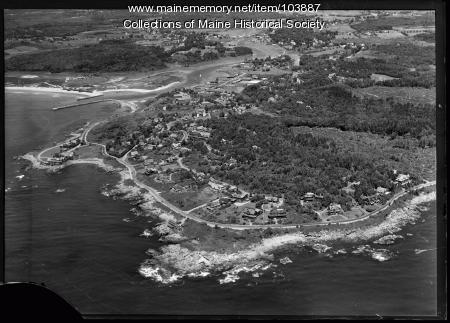 A local designation for a part of Kennebunkport, Cape Arundel was established as a resort community within a larger community. Land development flourished along Ocean Drive, the road in the foreground, which runs from the Colony Hotel to Walker’s Point. Hotels and summer homes graced the cape, flanked by the small bit of land to the left, known as Old Fort Point.

The “Old Fort” was a War of 1812-era fortress, the remains of which no longer exist. Local legend credits an infamous “summer person” with destroying the last of the fort, along with an adjacent colonial-era graveyard. The point is now home to St. Ann’s Episcopal Church.