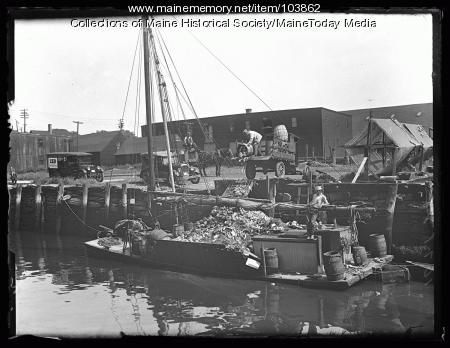 The Scow Vixen, captained by Clinton T. Goudy, was used to dispose the city of Portland's waste as a part of the policy implemented by City Manager Harry A. Brinkerhoff a year prior. This policy moved Portland near other coastal cities in terms of sanitation. The system involved the moving and disposal of garbage into the sea as, "one step more in the direction of ideal sanitary and health conditions." The Scow Vixen would be loaded until noon daily. Then it would transport the waste to the government dumping ground off of the eastern end of Ram Island. In the summer, the crew would dispose of the waste three miles farther out than needed to.
The story ran in the Portland Evening Express Monday, July 27, 1925.