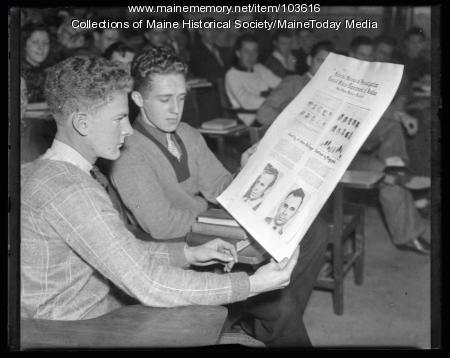 Roderick Steele, left, and Laburton Bailey, right, Deering High School students, examined an FBI poster with John Dillinger's fingerprints. Inspector Leroy L. Greely, from the local police, visited the school to share what he had learned about fingerprinting after attending the Federal School of Investigation in Washington D.C.

In an example Greely shared, John Dillinger had used acid to try to remove his fingerprints, but after he was killed in a 1934 police shootout, FBI technicians were still able to clearly identify his unique prints.

This picture accompanied an article written by Deering students in the December 18th, 1936 issue of the Portland Evening Express