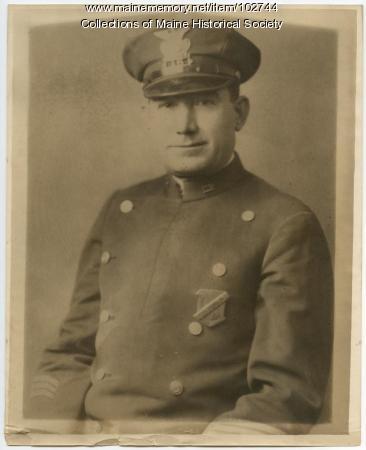 Anthony Petropulos (1883-1972) left his home in Potamia, Greece at the age of 14, and initially immigrated to Massachusetts by way of Canada. He studied at American International College and worked in various factories, including as a foreman for General Electric in Massachusetts, before he moved to Lewiston.

Petropulos worked at a shoe factory in Auburn prior to being appointed to the Lewiston Police force from 1918 to 1945. He continued his civic involvement after he retired, serving as an Alderman, on the Lewiston City Council, and the Lewiston Republican City Committee.

Petropulos became a U.S. citizen in 1906, but waited until 1946 to legally change his first name from "Adon" to Anthony. The Lewiston Evening Journal reported in 1943 that Petropulos, "… so well typifies the American spirit, so fully demonstrates how the man or woman, born on another shore, born to speak another language, born to customs greatly at variance with ours can come here and thoroughly absorb our ways and our spirit.”

Stories of Petropulos's patriotism abound. During World War II, Anthony's son asked what would happen if Greece entered the war, to which he replied, “You and I are Americans, son, and we’ll fight for the stars and stripes against Greece or any other country!”