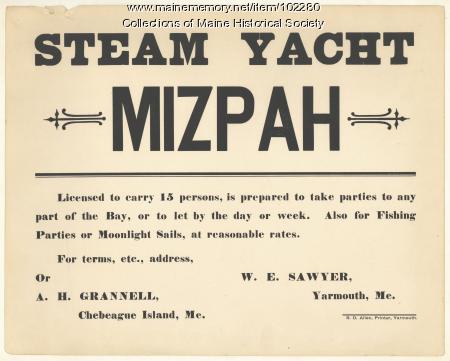 The steam yacht "Mizpah" operated at the turn of the century for general tourist purposes in the Casco Bay area.

The ship was one of the first generation steam vessels that brought the latest transportation technology to the business of tourism in Maine. The ship was owned by Albert H. Grannell (1843-1905), a grocery clerk who bought the "Mizpah" after retiring, and his nephew Wilmer Eugene Sawyer.

Albert Henry Grannell, who was born in New Brunswick, lived on Chebeague Island. Albert's profession was a "Stone sloop" sailor from 1855-1890, and a grocer and co-owner of Hamilton & Grannell from 1890-1905. Albert's nephew Wilmer Eugene Sawyer resided on High Street in Yarmouth from 1870-1944.