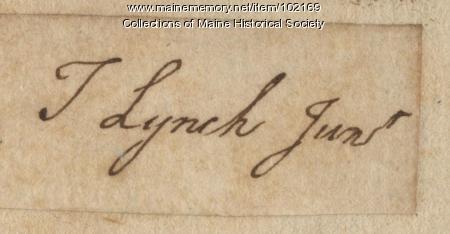 Thomas Lynch, Jr. (1749-1779) was a representative to the Continental Congress from South Carolina. He was a company commander in the South Carolina regiment in 1775 and was elected to the Congress in the same year. He resigned from the Congress shortly following his signing of the Deceleration of Independence due to illness. In 1779 at the age of 29, he and his wife set sail to France to receive medical treatment, but their ship was presumably wrecked in the Bermuda Triangle and was never found.

This signature stands without a letter, but instead was taken from the title page of a 1766 book called "Essay on the Autographic Collections of the Signers," compiled by Dr. Lyman C. Draper.