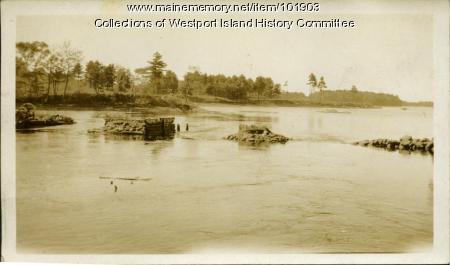 Westport Island had a bridge connecting to Woolwich on the mainland from the mid-1800s until 1893.

It was a 1352 foot wooden bridge across Montsweag Bay at Phipps Point, about five miles south of the bridge opened in 1972 across the Cowsegan Narrows. The bridge's wooden pilings were ultimately no match for the ice and tides, with massive ice damage each spring. An ice jam in the winter of 1892-1893 knocked out part of the bridge, and it was never rebuilt.

Bessie Greenblatt, a teacher on Westport Island from 1929-1930, took this picture when she lived on the island.