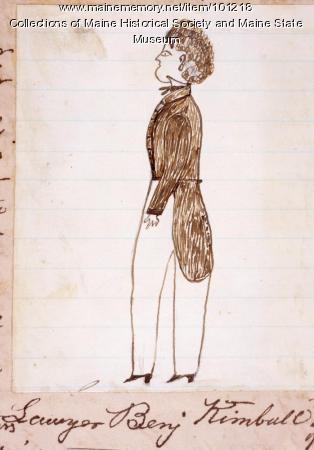 Benjamin Kimball, a Bangor lawyer, served in Co. B of the 22nd Maine Infantry from October 1862 to August 1863.

John Martin, a Bangor accountant and shopkeeper, wrote of Kimball, "When the 22 Regiment left Bangor for Ship Island he was the tallest & handsomest man in the regiment." Martin's illustration of Kimball and commentary about him is on page 58 of "Scrap Book no 3" that Martin wrote about his life and events in the Bangor area.

He wrote that on September 28, 1866, Kimball and Arvida Hayford, whose offices were in the same building met on a stairway. Hayford reportedly insulted Kimball and Kimball struck Hayford across the nose. Kimball was arrested and Martin speculated that he lost most of his business as a result of the incident.

Kimball and Martin were both Republicans; Hayford was a Democrat. Kimball took out a newspaper ad attempting to get back business and suggest that Hayford had set out to destroy his reputation.

Martin wrote, "This shows the spirit of democracy as it is which is to howl down every man who advocates right and is sincere in what he preaches."