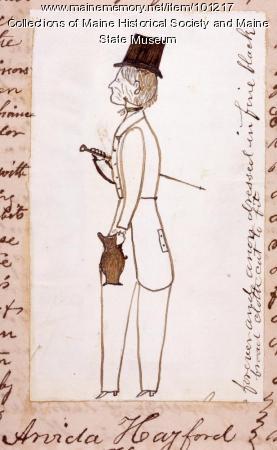 He wrote of Hayford, "The gentleman below has been noted as the hero of profligacy in Bangor for 25 years. I have given his person & expression almost exact representing him carrying his pitcher of water to his office on maine st ..."

Martin wrote that Hayford was a staunch Democrat and was the Indian agent for the Penobscot Indians in the 1840s for several years.

Martin, a Bangor accountant and shopkeeper, temperance man, and Republican, also wrote that during temperance years, Hayford imported alcohol and provided it to "Irish men & women in open defiance of the Maine law." He further charged that Hayford provided housing for "bad women."