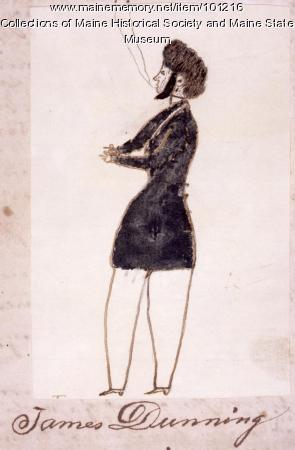 James Dunning of Bangor operated a seed and grocery store and was involved in efforts to build a rail line from Bangor to Waterville. That project included stock sales on which most investors lost money.

Dunning is shown here in a sketch John Martin of Bangor made on page 51 of his "Scrap Book no 3," a series of recollections on his life and commentary on contemporary events.

Martin (1823-1904) devoted a section of the "Scrap Book" to politics around 1866. He described Dunning, a former Democrat who became active in the Republican Party, as "always to be seen on public occasions." He described a number of Democrat "rascals" and included Dunning in the "rascal" category, recounting a number of Dunning's schemes.

A text "bubble" coming out of Dunning's mouth in the illustration quotes Dunning in response to a question about whether he could support President Andrew Johnson's policies as asking the questioner, "if he thought I was a d -- med fool."

The quote is from a speech he gave at Bangor City Hall September 16, 1866.