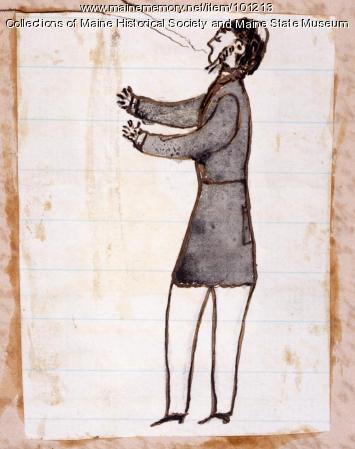 Here he appears as drawn by John Martin, a Bangor accountant and shopkeeper, who drew a series of prominent Bangor Democrats on page 26 of his "Scrap Book no 3," which he wrote and illustrated beginning in 1867. Martin, a Republican, described the activities of the post Civil War Democrats in Bangor.

Martin wrote about a speech Ladd gave on Sept. 20, 1866 when he returned from the Republican mid-term convention in Philadelphia. He wrote that the event was known as the "padlock convention," because it was held behind closed doors and no proceedings were printed.

Martin wrote that Ladd supported Andrew Johnson and that Ladd said, "if the radicals refuse to admit our representatives to Congress" Johnson would "place them there by arms."