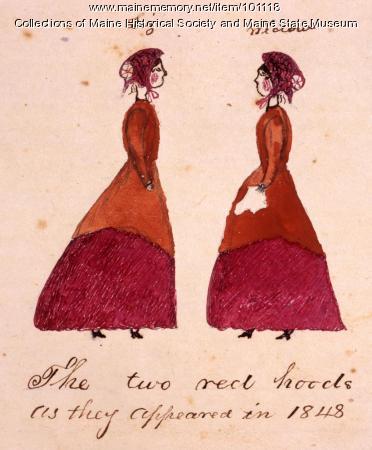 Liz, about 20, and widow Clark from Castine, about 25, appeared in Bangor in the winter of 1848. Both were "handsome in the extreme" and "were first seen promernading Kenduskeag bridge dressed in two suits made of red Thibot dress brown sock and red hoods."

"They created a sensation all over the city," according to an account John Martin, a Bangor accountant and shopkeeper, wrote in his "Scrap & Sketchbook" that he began in 1864. Starting on page 108, Martin wrote about the changes in Bangor between 1844 and 1864 and discussed women "who bore a bad name."

He wrote that Liz and Clark rented a house and "In a short time the young men who cared but little about Character visited the house in dozens and some disgracefull and noisy transactions were committed..."

He described them as "respectably educated" and said they "could as the lady as fine as the finest," as well as "swear and be more profane than any sailer." He wrote, "Manners, dress, and the excitment which they created while here was never equled by any number of females."