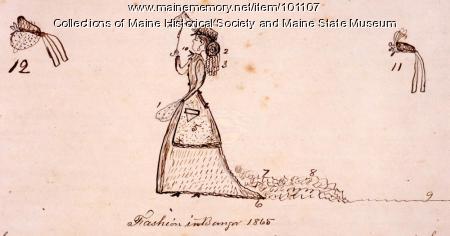 John Martin (1823-1904), a Bangor accountant and shopkeeper, was interested in fashion, and in the various reflections that he wrote and illustrated about his life, he often included comments about -- and drawings of -- fashion.

He accompanied this illustration of "Fashion in Bangor, 1865," with a discussion of what his mother wore when he was 4 years old and commented on what had changed, especially in bonnets, in 37 years.

Martin wrote, on page 88 of the "Scrap & Sketch Book" that he began on June 14, 1864, "manufacturers made a clean sweep to kill pressing over so as to sell new stock and established a fashion as above to take off the rim entire and leave nothing but the crown and a visor."

He suggested that women's fashions changed when men went off to the Civil War.