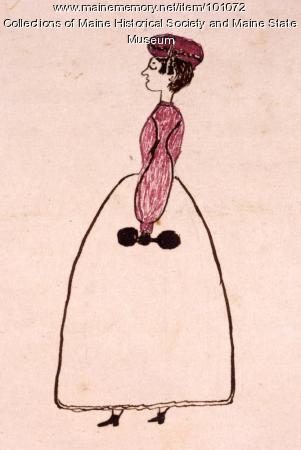 Ada Martin (1851-1923), the eldest child of John and Clara Martin of Bangor, participated in what her father called "one of the most novel sights ever exhibited in this city" -- a gymnastics demonstration.

John Martin (1823-1904), an accountant and shopkeeper, drew the illustration of his daughter in her gymnastic costume as she appeared in the performance at Solon Wilders Floral Concert at Norombega Hall in Bangor on July 9, 1864.

Martin wrote that in other years, the performance had been mostly singing, but in 1864, 26 of his 400 students performed the gymnastics they had practiced. Martin wrote a detailed description of the event, along with the illustration, on page 43-44 of his 1864 "Scrap and Sketch Book."